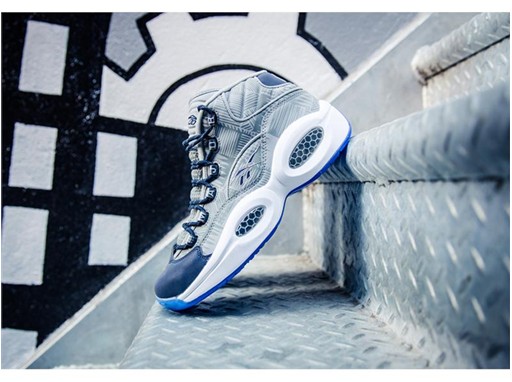 The latest release from Reebok's 20th Anniversary of the Question Mid - one of Allen Iverson's on-court sneakers that debuted in 1996 - is the MAJOR x Reebok Question collaboration.

To honor the latest release of the iconic AI shoe, DC boutique MAJOR took inspiration from AI’s college team in impeccable form. The bold colorway combines an all-reflective material for the upper—inspired by Iverson’s flashy style of play—with the recognizable kente cloth graphic print from the uniforms of Iverson’s era with the team.

Below the icy blue outsole, you’ll find a graphic of AI’s bulldog tattoo, his first of many more that decorated his frame over the years. Further special detailing includes insoles printed with the zip codes of the Georgetown area of D.C.

The MAJOR x Reebok Question will be available in limited quantities for $180 in-store at MAJOR on March 18 at 11am, followed by an online release on the 19th.