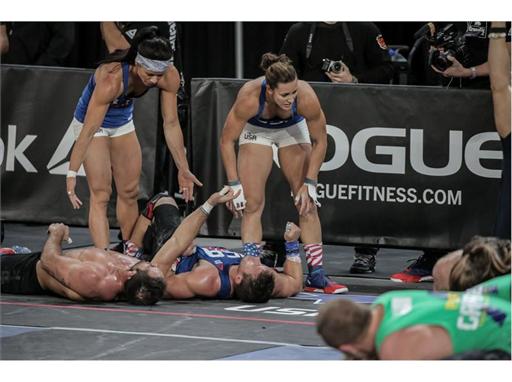 December 6, 2015 – Madrid, Spain – The US Team were today crowned Champions at the 2015 Reebok CrossFit Invitational after a day of tough competition. The US Team, consisting of elite competitors Rich Froning. Jr, Dan Bailey, Chyna Cho and Margaux Alvarez, won a tightly fought contest against The Canadian, Pacific and European Teams in Madrid, Spain.

This year’s Invitational was one of the closest contests in recent years, with The US Team taking just a two point lead over The Canadian Team into the final event that rewarded 7 points to the winner. Froning. Jr and his team were able to get through the synched muscle ups, row, bike and worm in 13:52, one minute faster than their closest competitor.

“The 2015 Reebok CrossFit Invitational is all about the CrossFit community and the passionate supporters of CrossFit around the world, so this victory means a lot to those we represent as well as ourselves. It was an extremely tough but fun day of competition that caps off an exciting year for this sport.” said Rich Froning. Jr.

Reebok, the exclusive footwear and apparel partner of CrossFit, outfitted every athlete with its range of dedicated CrossFit apparel and footwear, including the new Reebok CrossFit Speed Trainer. The latest edition to Reebok’s storied footwear range is the ideal performance shoe, designed particularly for high intensity and cardio based CrossFit workouts. The Reebok CrossFit Speed Trainer will be available beginning January 15 through Reebok online http://shop.reebok.com​ and store.crossfit.com​.

The 2015 Reebok CrossFit Invitational was the fourth event of its kind, bringing together elite international CrossFit athletes to compete as a team to represent their region for the annual title. This year represented one of the strongest fields in the competition’s history, comprising of the US, Europe, Canada and Pacific, with the event continuing to grow each year.

The team line ups and Coaches were as follows:

To view the full leaderboards and for more information on the 2015 Reebok CrossFit Invitational visit: store.crossfit.com​.