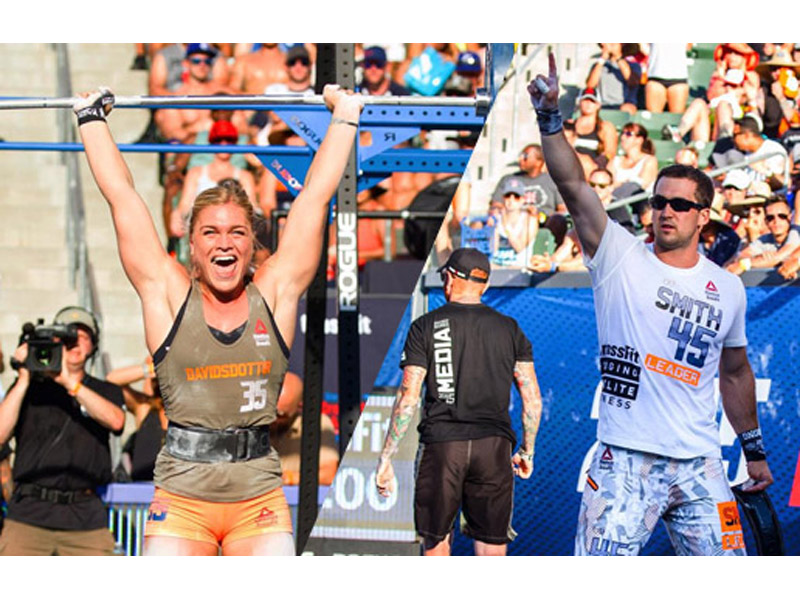 Carson, Calif. – July 27, 2015 – After a dramatic four days of tough CrossFit competition, Ben Smith and Katrin Davidsdottir have taken the accolade of Fittest Man and Woman on Earth™ at the 2015 Reebok CrossFit Games.  Smith and Davidsdottir successfully competed against some of the finest and toughest CrossFit athletes from across the globe to take the winning crown in front of a packed audience at the StubHub Center in Carson, California.

This year saw a fierce fight for the top spot in the male competition, as Smith (Chesapeake, VA), a seven-time Games competitor,  battled it out in a back-and-forth showdown with Games favorite, Matt Fraser (Williston, VT) over the 13 events. Smith’s victory represents the first time the men’s title has changed hands since 2011, ending the four-year reign of veteran Rich Froning who added a team trophy to his collection instead, as he competed and lead his CrossFit affiliate CrossFit Mayhem Freedom to victory in the Team category.

Fittest Man on Earth, Smith, said: “I haven’t changed anything in my training or with changing any programming, I think just coming to the Games with more confidence was the key. This year I went into every single event and gave it 100%. I wasn’t going to hold back on any of the WODs”.

In the Women’s competition, the field was blown away by some outstanding and powerful rookie performances. In just her third year at the Games, Iceland’s Katrin Davidsdottir topped the podium for the first time and was joined by two women  competing in the Games for the first time; Australian Tia-Clair Toomey, who was awarded Rookie of the Games, and fellow Icelander Sara Sigmundsdottir.

“Having Sara there was fantastic as we pushed each other throughout the whole event” Katrin commented. “This year was really tough, with many obstacles that I haven’t seen before. I had to make on the spot decisions about how I could conquer it. There was so much fresh blood in the competition and to see two rookies stand on the podium with me, is a testament to how much CrossFit is growing.”

VP of Functional Training at Reebok, Kenny Gamble added: “Designing and developing the very best CrossFit footwear and apparel is something Reebok takes great pride in. The entire 2015 Reebok CrossFit Games season was special for us as we marked five years of partnership and evolution with CrossFit. These amazing athletes put our products to the test with these events and some of the surprising and unknown pieces of equipment at The Games. At this time every year, Reebok gets even more inspired and excited by the limitless potential that exists in CrossFit and we look forward to continuing to evolve our products to service the CrossFit community.”

Reebok has been title sponsor of the CrossFit Games since 2011 and continues to invest in the sport and the community every year.

To view the full leaderboards and for more information on the 2015 Reebok CrossFit Games visit: http://games.crossfit.com.​