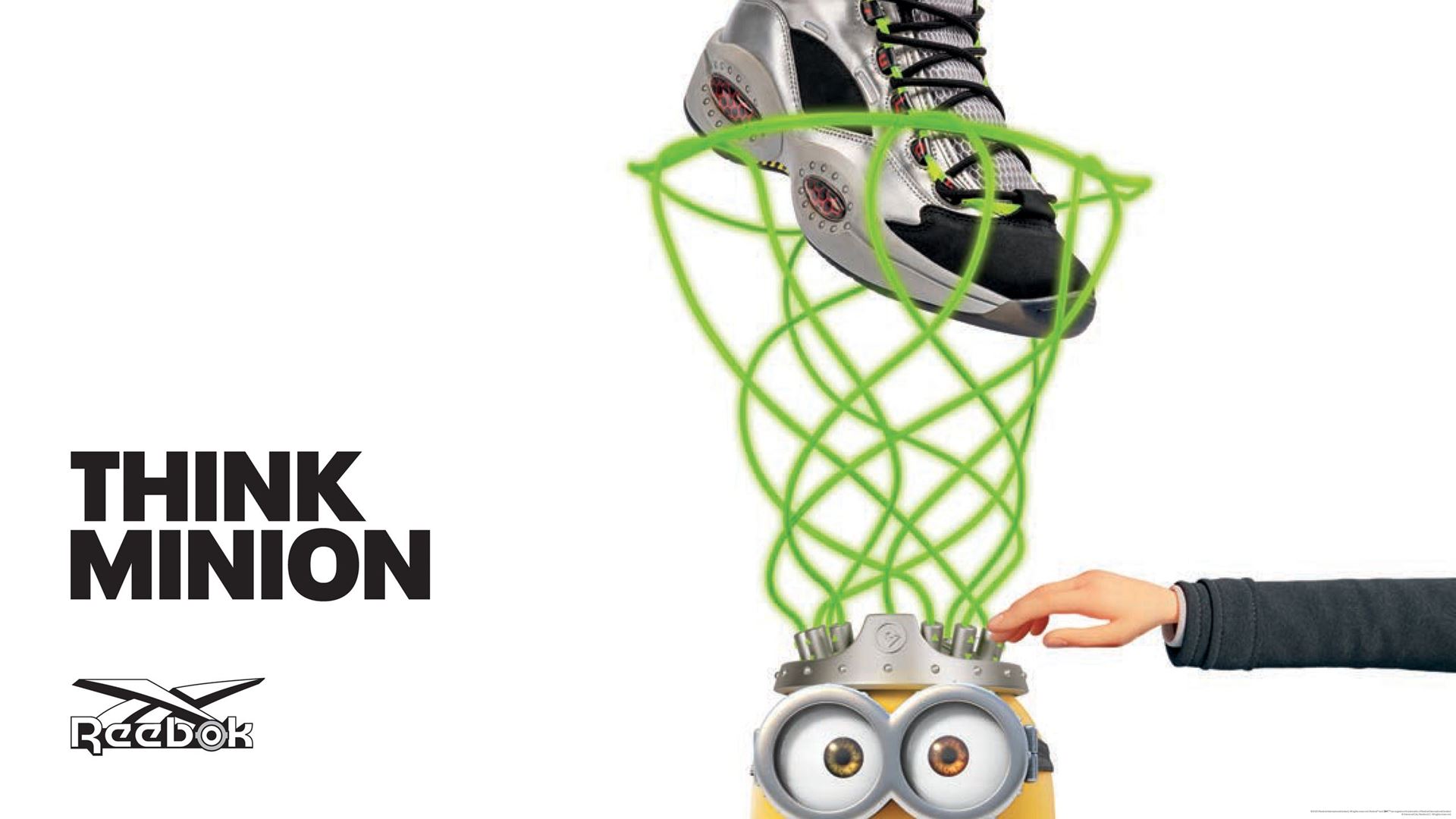 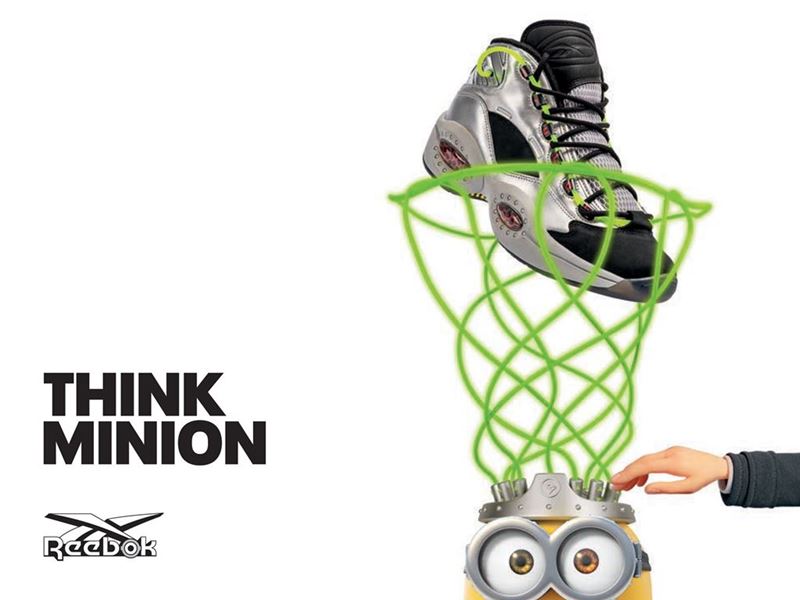 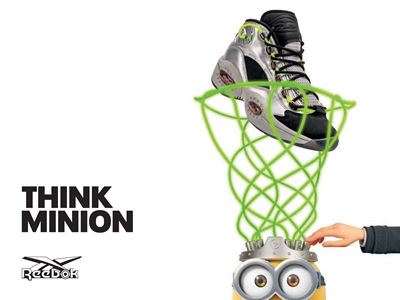 Recognized globally as the world’s most successful animated film franchise of all time, Illumination’s iconic Despicable Me continues to capture the imagination of audiences worldwide. Evolving the Minions legacyand Reebok’s historically bold brand narrative, the Minions x Reebok collection injects inspiration directly from the forthcoming film that chronicles the untold story of one 12-year-old’s dream to become the world’s greatest supervillain.

Minions x Reebok Question Mid “Gru’s Lab” ($175) : An imaginative modification of the historic Question Mid inspired by a young Gru for the ‘baddest’ baller of all-time, Allen Iverson, this silver/black execution injects glow-in-the-dark sticky “slime” into the outsole through two intake and outtake tubes to achieve impossible grip on court, while adapted rocket booster graphics underfoot propel any undersized villain to the rim. Using different “metals” from around Gru’s lab to form a mostly unpolished silver upper, while a more-finished glossy chrome leather panel at the heel pops above his signature “G” logo stamped in place of the traditional Iverson “3”. Looking inside, wearers will find asymmetric double-sided ‘trap door’ sock liners - a first-of-its kind sneaker innovation - that each hide top-secret elements from Gru’s lab on the underside. Available in adult sizing.

Minions x Reebok Club C “Vicious 6” ($100) : Nodding to the film’s 70’s vibes and the specific textures and retro colors dressing of the Vicious 6 villains’ lounge, this understated Club C features corduroy, premium leather and nubuck panels on the upper, a velvet interior lining, shag rug sock liner, and soft cotton laces all brought together by the Vicious 6 logo on the tongue. Available in adult sizing.

Minions x Reebok Instapump Fury “Minions” ($170) : An homage to the Minions’ iconic yellow and blue color palette, this vibrant yet wearable take on the Instapump Fury is imagined through the eye(s) of the Minions themselves, creating an asymmetric pair with bold nods to the film including a Minions party insole, Minion eyes on either Pump button, a banana peel graphic on the left outsole and reflective hits throughout. Available in adult and toddler sizing.

Minions x Reebok Club C “Otto” ($70) : This subtle yet bright kids-only take on the classic Club C celebrates the franchise’s newest Minion, “Otto.” The silhouette, a second creation inspired by the Minions horde, is filled with yellow paint, Minions party insoles, pops of lime green and a splash of mud on either outsole – the meaning behind which will be revealed in the forthcoming film. Available in grade school, pre-school and toddler sizing.

Finally, Gru’s lab is replicated in real life by elevated sneaker packaging that houses each of these Reebok creations. Displayed on the box are hand-illustrated orthographic views of Gru’s childhood bedroom and top-secret lair riddled with Easter eggs from the forthcoming film and additional details that Minions, Iverson and Reebok fans will all enjoy.

On September 30, members of Reebok UNLOCKED (Reebok’s free loyalty program that offers exclusive perks and consumers) will have one-day early access to the Minions x Reebok collection. Then, on October 1, the collection becomes available industry-wide from Reebok.com and select local retailers.

Fans can look out for additional details and content from the collection and more to be revealed by Reebok and Illumination ahead of the October 1 product launch as well as in the lead up to the July 2021 theatrical release.

About Illumination: Illumination, founded by Academy Award® nominee Chris Meledandri in 2007, is one of the entertainment industry’s leading producers of event-animated films, including Despicable Me, the most successful animated franchise in cinematic history.  The company’s releases include two of the top 10 animated films of all time, and its iconic, beloved franchises—infused with memorable and distinct characters, global appeal and cultural relevance—have grossed more than $6.25 billion worldwide.

Illumination, which has an exclusive financing and distribution partnership with Universal Pictures, is the creator of the  world of Despicable Me. The franchise includes Minions, the fourth-highest-grossing animated film of all time and the most profitable film in Universal’s history, as well as the Academy Award®- nominated Despicable Me 2 and Despicable Me 3, which made more than $1 billion at the global box office.

Illumination has launched two additional original properties that captivated audiences worldwide: The Secret Life of Pets, which achieved the best opening for an original movie, animated or otherwise, in U.S. history, and the global smash, Sing. In 2018, Illumination’s Dr. Seuss’s The Grinch had the biggest opening weekend of any Christmas-themed movie in history, followed, in June 2019, by The Secret Life of Pets 2. Illumination’s upcoming films for 2021 include Minions: The Rise of Gru in July and Sing 2 in December.