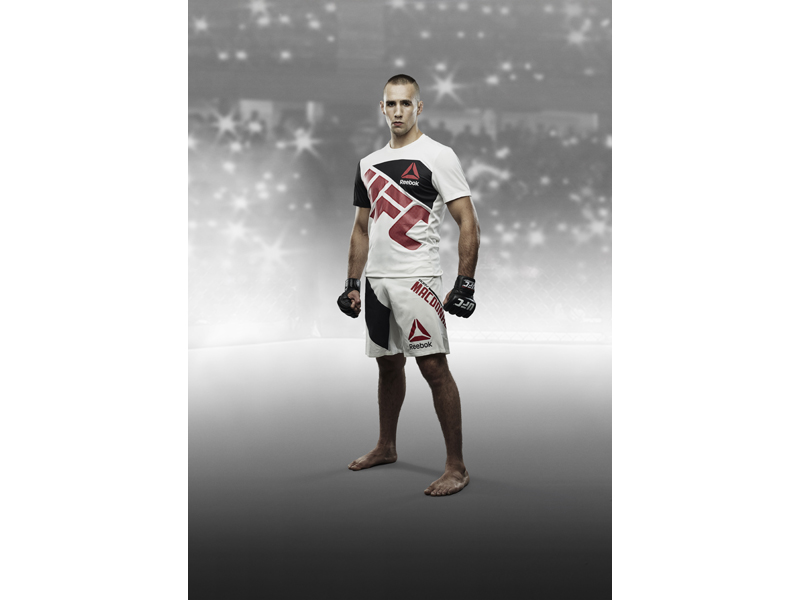 Continuing to empower fitness enthusiasts around the world through its tough fitness approach, Reebok announces its partnership with Canadian UFC® Welterweight Rory MacDonald.

MacDonald, a native of Quesnel, British-Columbia who fights out of Tristar Gym in Montreal. “Rory wants to become a UFC Champion and the Reebok brand will be there to support him in achieving his goals,” said Stewart Clark, Director of Marketing for Reebok Canada. “Reebok’s vision is to empower people to push their limits to become better versions of themselves and this also applies to our partnership with Rory. We are excited to have him part of the team and look forward to his success in and out of the Octagon.”

A versatile fighter and solid defender, MacDonald is thrilled to join the Reebok team. “I am honoured to partner with Reebok, a brand that believes in working hard to get to the top and who can support me in my journey in the UFC,” said MacDonald during UFC’s International Fight Week in Vegas. “I only surround myself with the best: teammates, coaches and sparring partners, to become the very best fighter possible. And now Reebok completes the mix.”

UFC 189 was the first UFC event featuring Reebok’s newly released UFC Fit Kits that all fighters will wear in the Octagon moving forward.

Reebok International Ltd., headquartered in Canton, MA, USA, is a leading worldwide designer, marketer and distributor of fitness and lifestyle footwear, apparel and equipment. An American-inspired global brand, Reebok is a pioneer in the sporting goods industry with a rich and storied fitness heritage. Reebok develops products, technologies and programming which enable movement and is committed to accompanying people on their journey to fulfill their potential. Reebok connects with the fitness consumer wherever they are and however they choose to stay fit – whether it’s training, running, walking, dance, yoga or aerobics. Reebok Classics leverages the brand’s fitness heritage and represents the roots of the brand in the sports lifestyle market. A subsidiary of the adidas Group, Reebok operates under the multiple divisions of the Reebok brand, Reebok-CCM Hockey and the Sports Licensed Division.  Reebok is the exclusive outfitter of CrossFit and the CrossFit Games, the official title sponsor of the Reebok Spartan Race; the exclusive authentic global outfitter of UFC, and exclusive apparel provider for Les Mills.

For more information, visit Reebok at http://www.reebok.ca or, for the latest news at http://news.reebok.com/.

UFC® is the premier mixed martial arts (MMA) organization and largest pay-per-view event provider in the world. Headquartered in Las Vegas with offices in London, Toronto, Singapore and Sao Paulo, UFC produces more than 40 live events annually that consistently sell out some of the most prestigious arenas around the globe. UFC programming is broadcast in 129 countries and territories to nearly 800 million TV households worldwide in 28 different languages. The UFC has a multi-year broadcast agreement with FOX in the U.S., which annually includes four live events broadcast on the FOX network, as well as The Ultimate Fighter® reality television show and thousands of hours of programming on FOX Sports 1 and FOX Sports 2. In 2014, UFC launched UFC FIGHT PASS™, a digital subscription service with exclusive live events, thousands of fights on-demand and original content. The UFC organization also licenses over 100 UFC GYM® locations, and owns UFC.TV® (offering live event broadcasts and video on-demand around the world), UFC FIT® (an in-home fitness and nutrition program), UFC Magazine, and has a videogame franchise with EA SPORTS, UFC Fight Club®, UFC Fan Expo®, UFC branded apparel, DVDs and Blu-rays and Topps Trading Cards. For more information, visit UFC.com and follow UFC at Facebook.com/UFC, Twitter and Instagram: @UFC.