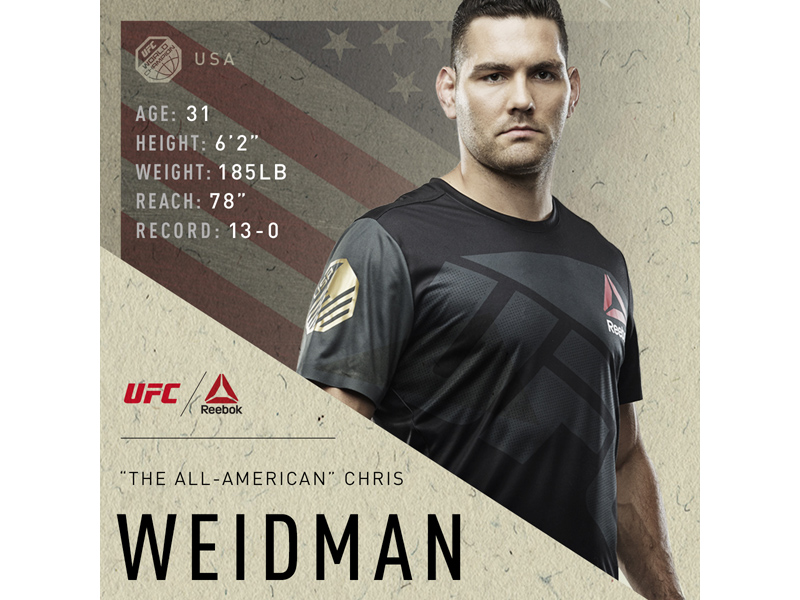 October 19, 2015 - Canton, MA – Continuing its passionate commitment to the growth and support of mixed martial arts (MMA) around the world, Reebok today announced its newest partnership with undefeated UFC® MIDDLEWEIGHT champion, Chris “The All American” Weidman.

From Baldwin, New York, Weidman (13-0-0) has experienced a meteoric rise to the top of the MIDDLEWEIGHT division. During his UFC career, he has transformed into one of the most exciting athletes in the sport, with victories over some of the most famous names in MMA, including former MIDDLEWEIGHT champion Anderson Silva and former light heavyweight champion Lyoto Machida.

“I’ve spent a lot of time with Reebok leading up to this day and believe whole-heartedly in the vision they have for MMA and combat training around the world,” Weidman said. “I’m proud to join their ranks and look forward to working alongside them to continue to develop and support the sport that I love at every level. I’m looking forward to what’s to come!”

Michael Lunardelli, Head of Reebok’s Combat Training category, said: “Chris Weidman has defied the expectations of many to be the champion fighter that he is today. His focus on improving himself through intense training has catapulted him to the top of the MIDDLEWEIGHT class.  Chris is also an inspirational coach who showcases his dedication to the sport of MMA and helps others be the best versions of themselves.  We are excited to have him on board to help Reebok continue to grow and improve our investment in MMA and combat training.  Chris has many years of success ahead of him and Reebok will be by his side in the Octagon® and beyond."

Weidman will next step into the Octagon® as a Reebok athlete to defend his MIDDLEWEIGHT title against no.1 MIDDLEWEIGHT contender Luke Rockhold in the co-main event of UFC 194®: ALDO vs. MCGREGOR at the MGM Grand Garden Arena in Las Vegas on Saturday, December 12, 2015.